No baptism or census records seem to exist for this Robert Esson who must have been born around 1810 according to an age of 32 recorded in prisoners’ log in 1842.  It is hard to identify who he was therefore. Perhaps newspaper articles from the time of his trial will shed more light on this question. But it seemed a dramatic enough story to tell.

Robert Esson was found guilty in 1841 of stealing a grey horned quey, a young cow or heifer, from a grass park named as Drummelduan in Crimond parish on or around Tuesday 24th of August 1841.

Two days later, if the court’s charge sheet was accurate, he took a horse and bridle from a shed at the blacksmiths shop of John Adie of nearby Strichen. That same day he then stole a riding saddle from James Mutch of Nether Ironside or Mill Brae in New Deer.

His trail, while taking these things, covered 15 miles or so in the North East corner of Aberdeenshire, from  Crimond to Strichen and then to New Deer. It seems he probably meant to ride away with his new property. Perhaps he had no work or saw a chance to better his lot. He did not get far before he was detained however. Judging by the host of witnesses called to his trial there is little wonder. On 24th September 1841 he was found guilty and sentenced by Aberdeen Sheriff’s Court to 14 years deportation to Van Diemens land, Tasmania as it is today.

Hanging for horse and cattle theft had been abolished in Scotland not too many years before. The last person hung for this offence was a George Watson in 1811. He was given shelter at a farm in Southern Scotland but chose to make off with a horse early the next morning. This seems to have annoyed the farmer because he tracked the thief for 150 miles to the North West Coast near Oban, knowing the horse had a broken shoe.

When the luckless Watson saw his pursuer he is said to have remarked “I didn’t expect to see you here”. 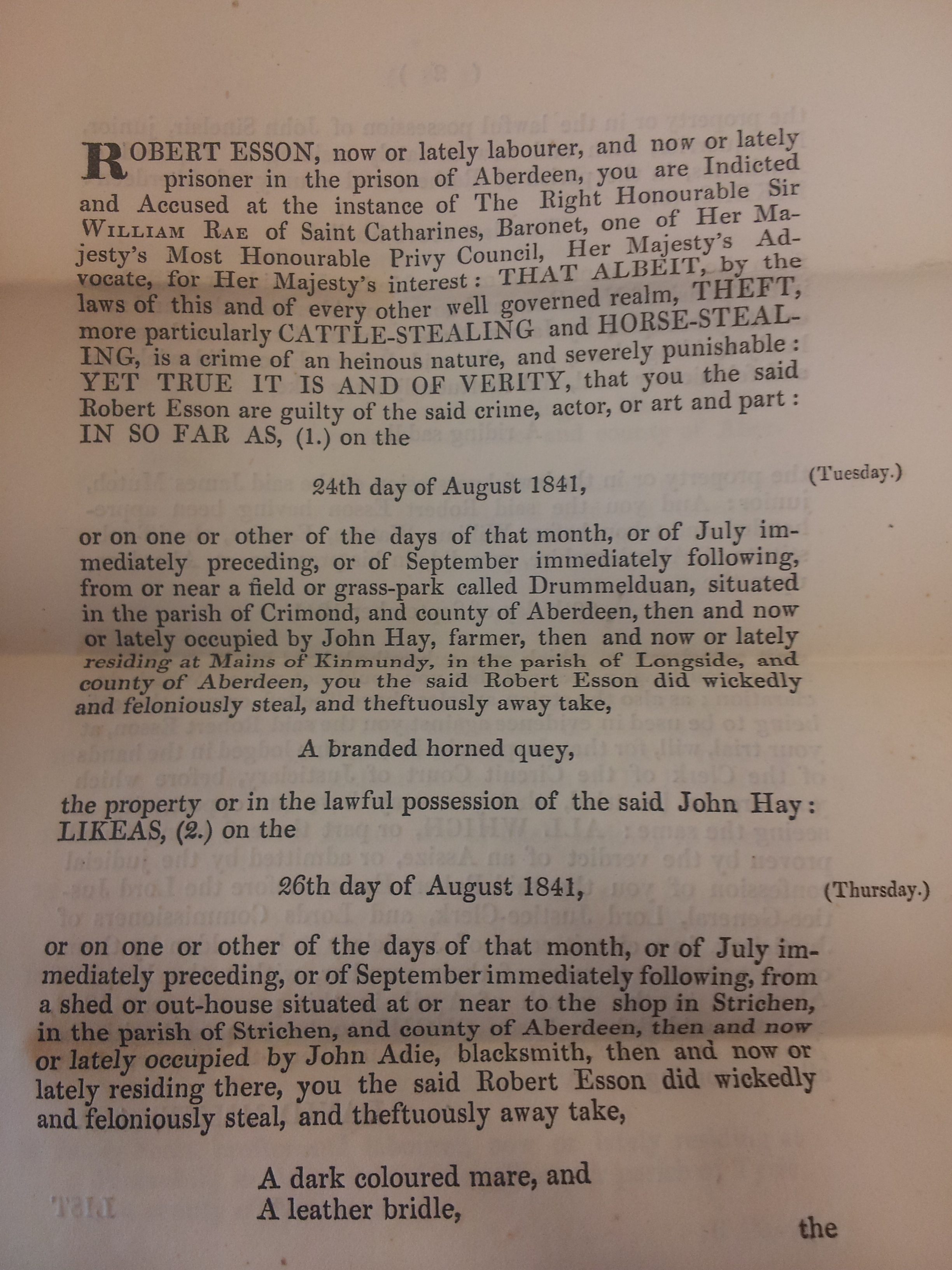 Perhaps Robert Esson’s sentence seemed more lenient , but like many deported convicts his fate was just as dark. In April 1842 he was being held on the prison hulk Justitia at Woolwich docks in London. There he was recorded in the prisoner’s log as having a violent temper, perhaps with good reason, but it might not have gone well for him. Troublesome prisoners were sometimes moved to the worse conditions in lower decks alongside others of similar disposition often. 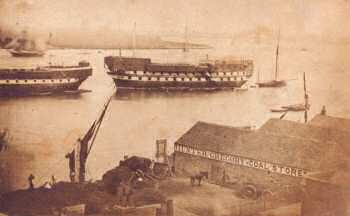 “The only known photograph of the convict hulks at Woolwich shortly before their removal in 1856.The hulks were established at Woolwich and at other ports in the 1770s to accommodate the burgeoning prison population.
Prisoners either served their time on the hulks or waited to be transported to Botany Bay in Australia. Universioty of Greenwhich : Ideal Homes.: . Ideal Homes:A history of South-East London suburbs (Idealhomes.org)

On 1st June 1842 he was on the convict ship The Waterloo as it left Sheerness docks for Tasmania. The Waterloo was a 414 ton merchant ship, built in Bristol in 1815, and used from 1829 to transport convicts to Australia and Tasmania. 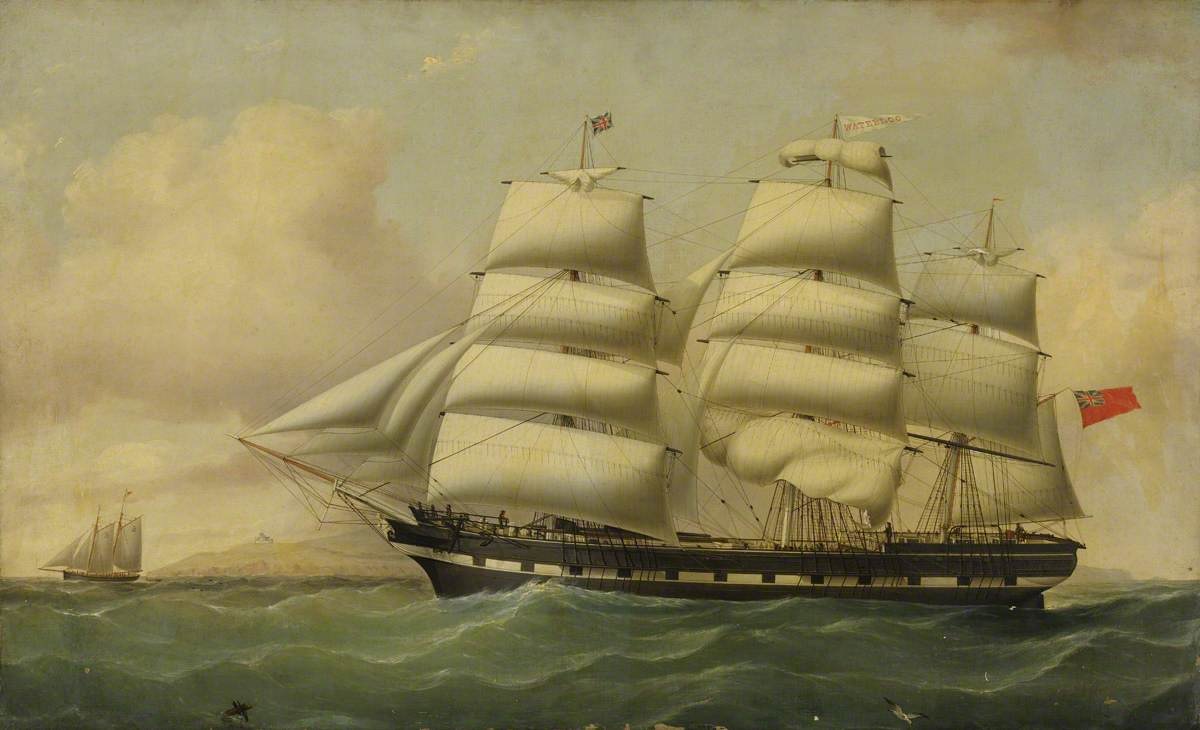 By 1842, 27 years after it was built the Waterloo, like many convict ships, was far from seaworthy.Almost three months after leaving Sheerness, the ship’s surgeon, Dr Henry Kelsall persuaded Captain Henry Ager to put in to Cape Bay to pick up fresh provisions, as many on board were suffering from scurvy. The ship was anchored in an exposed position and Captain went ashore, leaving the ship in charge of the first mate.

On 24th August 1842 the ship, along with others in the bay was battered by a powerful westerly storm. The Waterloo’s cables parted and the ship got into trouble. It was suggested after the first mate should have ordered the masts cut free. Maybe understandably, given the responsibility he declined to do so and the ship was washed broadside on, onto the beach.

Just outside the breakers, within sight and hearing of horrified onlookers on the shore it first broke in two and was then destroyed completely. There were no life boats in these time and despite the convicts being released from their chains, and the efforts of many on the shore, there was great loss of life. An eye witness sketch of the event showed convicts and crew clinging to the ship and wreckage. 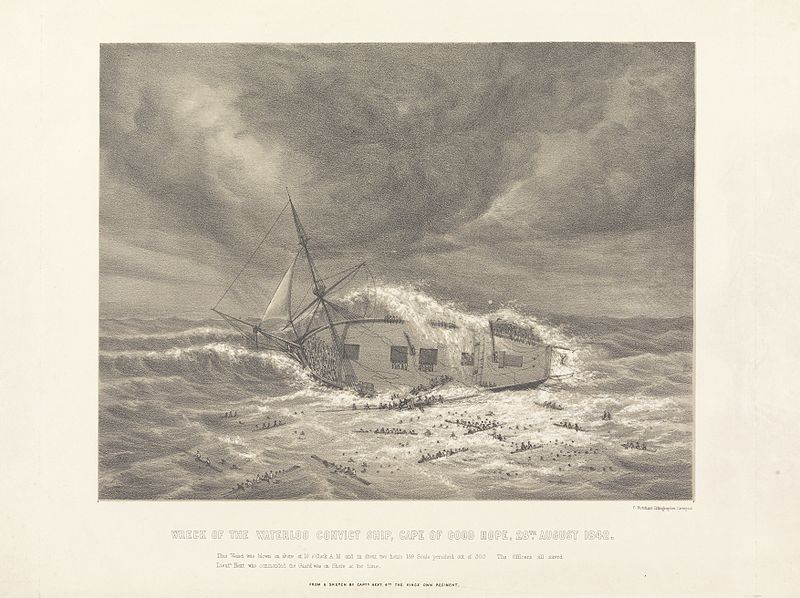 Lithograph of a sketch by an eye witness, Lieut Hext of The King’s Own Regiment (Wikipaedia)

189 died and 113 survived in all. 143 convicts, including Robert Esson, were killed out of a total of 213. Fifteen soldiers of the 99th Regiment, 17 of their wives and children and 14 of the crew also died. An equally badly anchored troop ship, the Abercrombie Robinson, was also swept onto the beach, but being seaworthy and in the handled of the Captain, all aboard from 500 to 700 soldiers and crew managed to escape unharmed. A number of other ships in the Bay survived the storm unscathed.

The Cape town press of the day described the scene graphically, and criticised the captain for leaving the vessel and the ship’s owners for the common practice of the day of using ships unfit for service to transport convicts.